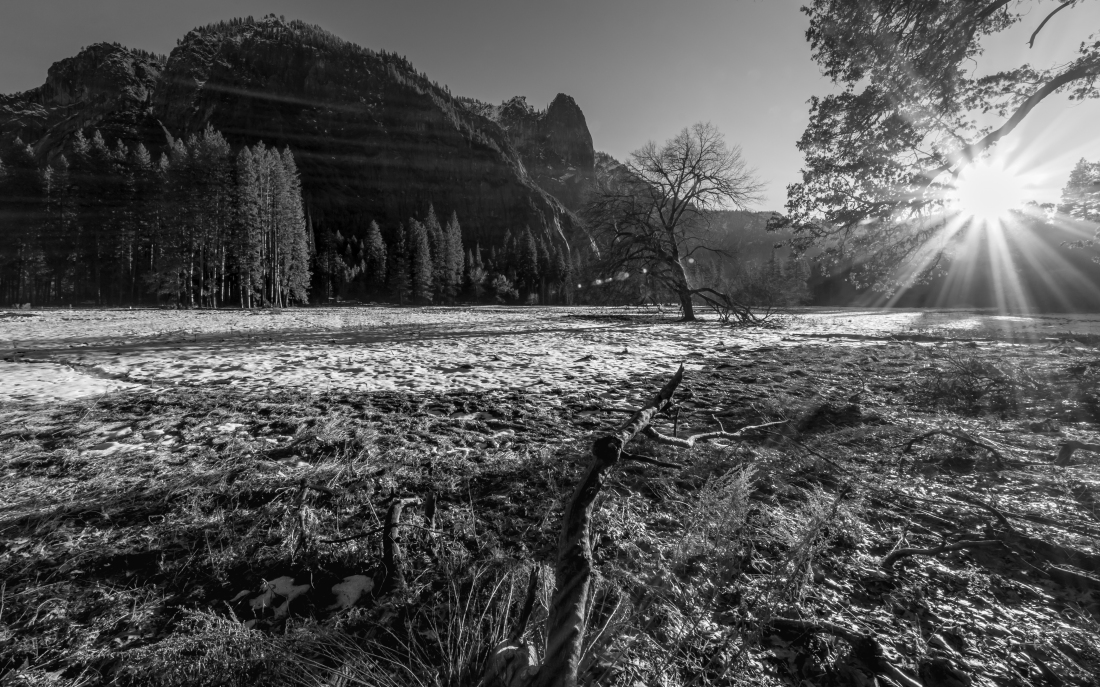 A final photograph for 2018, and a final one from my recent trip to Arizona and the Grand Canyon – a day long hike along the Bright Angel Trail led to this panorama of the Colorado River.

Standing on the edge of Plateau Point, nearly one thousand metres below the Grand Canyon South Rim, a drop of 1,300 feet beckons with another step forward…

Getting up when it’s still dark and – quite frankly – bloody freezing – is never easy. But we photographers know the rewards can be rich for making the effort.

Certainly I was hoping for a grand sunrise over the Grand Canyon when driving down the few miles from my Lodge to Navajo Point – the highest point on the South Rim – a whopping 2.275m above sea level!

The sky was still dark, crystal clear and only the stars shining brightly when I set out at quarter past six. The air chilly, I knew even the thickest of gloves wouldn’t be good enough to protect my hands of turning stiff and numb, when standing exposed to the wind, fiddling with camera settings and tripod.

I found my spot on the edge of a huge stone that extended a metre or so beyond the Canyon Wall of the Rim. I didn’t quite move to the edge… too afraid of stumbling!

It was to be the place for another nearly two hours…. at temperatures around minus 9 degrees initially (kindly dropping to more balmy minus five after sunrise)

As I took my first shots, going as wide as possible – 8mm – the sky looked simply fantastic. Hues of violet, red and orange…. beautiful!

Unfortunately, the “grand sunrise” never materialized. Slowly but steadily, the light got flatter, the colours washed out – it was to be an overcast day!

Well, thankfully I was early there to capture the beautiful scene before the actual sunrise, which resulted in the image accompanying this article. In truth, I couldn’t have asked for a more wonderful sunrise image of the Grand Canyon. It was well worth the early start and the freezing. Those moments, though – the raw nature, the scale of the landscape, the camera and yourself – there is something special about it.

In order to get maximum colour depth from a scene that had different light all over, I shot this is an HDR and used Lightroom in post for the HDR part.

One of the most “Instagrammed” places of recent times; and I have got that bucketlist item ticked off the list as well!

Ever since having seen photos of the Horseshoe Bend for the first time I wanted to experience this unique landscape with my own eyes – and get one of those “unique” panoramic shots.

Interestingly, it’s only a relatively new phenomenon that the Horseshoe Bend is so popular, which has seen annual visitor numbers rising up to 1.3 million!  Hordes of people armed with selfie stick and mobile phone is a common sight these days; locals tell the story of a a place kept a hidden treasure for most of its existence.

Just a few miles outside of Page, Arizona, a short trail winds its way up to the spectacular edges of the Canyon walls – it’s easy to see why this has become such a popular attraction. Ultimately, this is the reason why I found my way there too!

Thankfully it’s off-season. Yes, this was certainly the most crowded place I’ve been to during my trip through Arizona. But I expected worse. And experienced much, much worse in other parts of the world.

Despite sunset time, the most popular time of the day for the Horseshoe Bend, there was ample opportunity to wander left or right and leave the crowds behind to find a place for oneself, to take in the breathtaking scenery and enjoy the sun slowly fading away.

Nonetheless, the crowds become an issue. At other times, there’s no serenity here, and in order to accommodate the masses changes are coming to the Horseshoe bend: “proper infrastructure” is currently under construction: meaning a new trail, railings  as well as the rumours have it, a $25 entrance fee.

That’ll alter the uniqueness of the experience dramatically, of course. What choice have authorities, though? They’ve got to ensure safety and currently, that has to be said, it’s rather dangerous, given there are no barriers, and beyond the edges it goes 300 metres straight down!

For the photo I had in mind, a straightforward panorama, I brought the Sigma 8-16mm. Finding a place for myself wasn’t an issue…. but one that provided the perspective I had in mind, while having a panoramic images with no people tangling their legs over the edges was the difficulty.

I decided to wander to the left and “hid” behind a tall stone wall, that helped to frame the picture but also hid the people I didn’t want to have in the shot. Eight vertical frames were stitched together in post in Lightroom eventually.